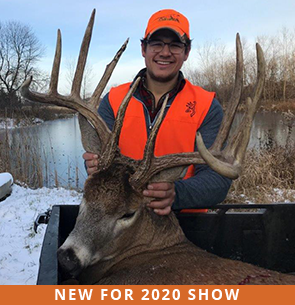 West Concord, Minn. — Patrick Shelton’s opening morning of the Zone 3A firearms deer season began with one of those Murphy’s Law moments that almost caused him to throw in the towel.

But 30 minutes later, in a turn of events that should inspire any rank-and-file hunter, Shelton was standing over a potential Boone & Crockett typical whitetail 10-point buck.

Hunting the family century farm east of West Concord, which lies west of Rochester in Dodge County on Nov. 9, 30-year-old Shelton found his ground blind covered in snow. In clearing it off, he ended up nearly collapsing the blind and covering himself and his shotgun in snow.

“I was really loud and banging around, cleaning everything up,” Shelton said. “I was sitting there with the top open, figuring, well, this morning is shot. Might as well eat lunch.”

But he stuck it out and spent the next 20 minutes cleaning off his 20-gauge Remington and scope. Ten minutes later, hands freezing and watching a decoy he’d placed 30 yards out, an amazing deer approached.

“I lean back, then all of a sudden, here he comes – 25 yards on my right from a pond by a little bluff,” Shelton recalled. “He’s moving and starts up a little hill about 45 yards away.”

Unwilling to let the deer move any farther, Shelton tried a quick grunt from his mouth. The sound and decoy gave the buck pause, and Shelton didn’t miss the opportunity, making a clean heart shot.

Did he remain patient and wait the recommended 20 minutes before leaving his stand?

“No, I was up pretty fast,” he said. “I saw some spray then tracked him in a 150-yard half-circle. It hit the perfect spot and he went down fast.”

A Viola taxidermist scored the buck at 180 gross and 175 net, which puts it in contention after the 60-day drydown period for the Boone & Crockett Recordbook. The all-time score minimum for the B&C Records of North American Big Game is 170 for a typical whitetail.

The large-bodied deer tipped a scale at 225 pounds dressed.

A partner and director at Current Resident, a Minneapolis-based video production company, Shelton had hunted Colorado for mule deer with his dad, brothers, and uncle just the week before. He’s shot muleys but this was his first white-tailed buck.

“I missed a decent mule deer the week prior in Colorado – the only one in our group who didn’t shoot a deer, and I was a little ticked about that,” Shelton said. “But I guess I got some redemption.

“And to get this on our family property, well I wouldn’t trade it for the world,” he said.

Founded by his great-grandfather, Frank Shelton, the 90-acre property received its century-farm status in 2017, he said. Patrick said his father, Mike, who was hunting the same morning a couple hundred yards away, was “beside himself” to see a trophy of this buck’s caliber come from the family farm.

Readers can see a shoulder mount of Shelton’s buck at the 2020 Outdoor News Deer and Turkey Classic, March 13-15 at Canterbury Park in Shakopee. And be sure to stop by the Blufflands Whitetails booth No. 518.