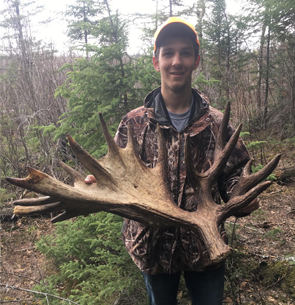 Ritchie Erickson found this nontypical moose shed in Cook County in 2022, it had 16 points and scored 133 5/8 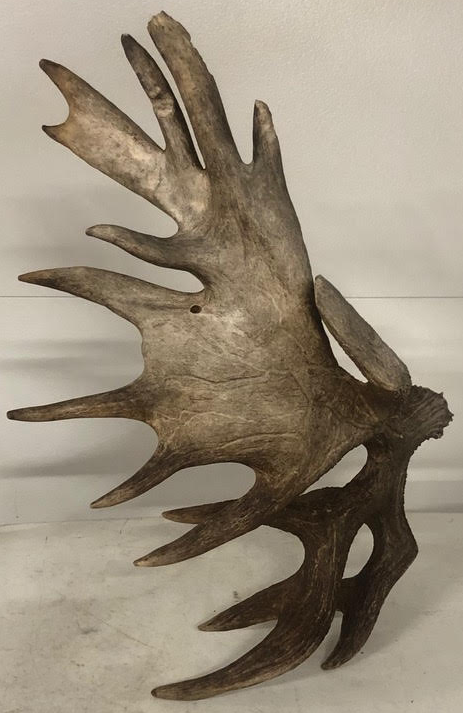 Erick­son was shed hunt­ing for moose antlers with his father, Chris Erick­son, in north­east­ern Min­neso­ta this May when the two decid­ed to search on oppo­site sides of a stand of trees.

Although the moose antler was par­tial­ly obscured by a fall­en pine tree, the younger Erick­son, 22, of Iron, could see a pair of irreg­u­lar points.

“I knew that they real­ly shouldn’t be where they were,” he said.

Said his father, “He yelled to me that he found a freak.”

“He said, ‘You ain’t gonna believe the moose pad­dle Richie just found,’” said Fer­rell, him­self a moose shed hunter. “The best I can describe it, it’s like a non­typ­i­cal deer antler with points all over the place. … It had over 82 inch­es of non­typ­i­cal points.”

The Erick­sons won’t say where the horns were found. After all, they spent the first five years of their decade-long shed-hunt­ing pur­suit turn­ing up few, if any, antlers. Even­tu­al­ly, an “old-timer” shared some moose shed-hunt­ing secrets, and the father-son shed-hunt­ing duo has since found hun­dreds of moose antlers.

“We live in St. Louis Coun­ty,” Chris Erick­son said. “We (shed hunt) from Ely to Grand Marais. What we tell peo­ple is we found it right where the moose was stand­ing when he shook and it fell off.”

In order for a shed to be entered into the MOM record book, the coun­ty, if known, must be shared.

“There are a cou­ple of unknown (entries in the record book),” Fer­rell said. “Nine­ty-five per­cent of our stuff, you know the coun­ty. The only stuff you don’t know – if it’s old­er, hand­ed down from your grand­fa­ther. You may not know exact­ly where it came from.”

The Erick­sons acknowl­edge they found the antler some­where in Cook County.

They were on the first day of a mul­ti-day, shed-hunt­ing out­ing when the antler was found. The amaz­ing find did not end their trip ear­ly as a result.

But with Fer­rell find­ing out about the antler right away – just days before a MOM meet­ing was sched­uled – he sug­gest­ed the Erick­sons get it to him imme­di­ate­ly. He knew he’d have plen­ty of expert mea­sur­ers around to con­vene a pan­el to judge the antler. Any antlers that are going to be in the top 5 in the books, accord­ing to MOM rules, require a pan­el score, Fer­rell said.

Fer­rell would end up being the lead mea­sur­er, with Dave Boland, Craig Pierce, and for­mer pres­i­dent Sean Grabow present as well to help with the pan­el score the moose shed.

The Erick­sons, reluc­tant­ly, hand­ed over the antler.

“We didn’t want to give the antler up because we bare­ly had it,” Chris Erick­son said. “What if some­body broke into his truck? Can you imag­ine if you found that and you nev­er got a chance to look at it for a day?”

Richie Erick­son said he want­ed to show it to some friends and fam­i­ly and to stare at him­self for a while.

But they hand­ed it off to Ferrell.

“It was nice to know where it stood right away,” Chris Erick­son said.

“I am pret­ty speech­less, think­ing about it still,” Richie Erick­son said. “Words can’t describe the feel­ing when I first found out. Carey asked me if I was sit­ting down. I had to text him two min­utes lat­er because I couldn’t remem­ber what he all said.”

The Erick­sons believe the antler, despite its “fresh” appear­ance was like­ly sit­ting there for a year, that it wasn’t a recent drop.

“The front of the pad­dle looks fresh, but that’s because it was tines-down with a tree over it,” Richie Erick­son said. “It didn’t get much sun at all.”

It’s not the first major moose find for the Erick­sons. In 2017, they found a pair of bulls, antlers locked, in a pond. That find also gar­nered some press.

This one has already led to some high-dol­lar offers for the antler, but Richie Erick­son said he isn’t inter­est­ed in sell­ing his prize.

“I’m hap­py that he hasn’t sold it,” Chris Erick­son said. “There are a lot of rea­sons to sell it. He is not going to. That is cool, too, because it fol­lows what we have always done, and that is not do it for mon­ey. I’m not say­ing I would nev­er sell one. But over­all we don’t. … We don’t do it for the val­ue of it. We do it for the entertainment.”

Most of the hun­dreds of shed antlers they’ve found have filled the stor­age space in their two homes and a garage.

Chris Erick­son said he’s glad his son found the antler, and not himself.

But he does wish he had more time to gaze and won­der at this irreg­u­lar moose antler, which he likened to freak­ish farmed deer antlers.

“I kind of wish he still lived with me so I could vis­it with it more,” Chris Erick­son said with a chuck­le. “He has had to haul it over to my house a few times so I could show it to my friends.”

“That is from fight­ing with anoth­er moose,” Chris Erick­son said. “Some­thing was will­ing to take it on.”

Richie Erick­son said he’s not sure how he’ll dis­play the antler in his home.

“Right now I have it propped up so when I’m sit­ting in the liv­ing room, it’s in front of me,” he said. “It will be dis­played some­how. I’m just not sure how yet.” 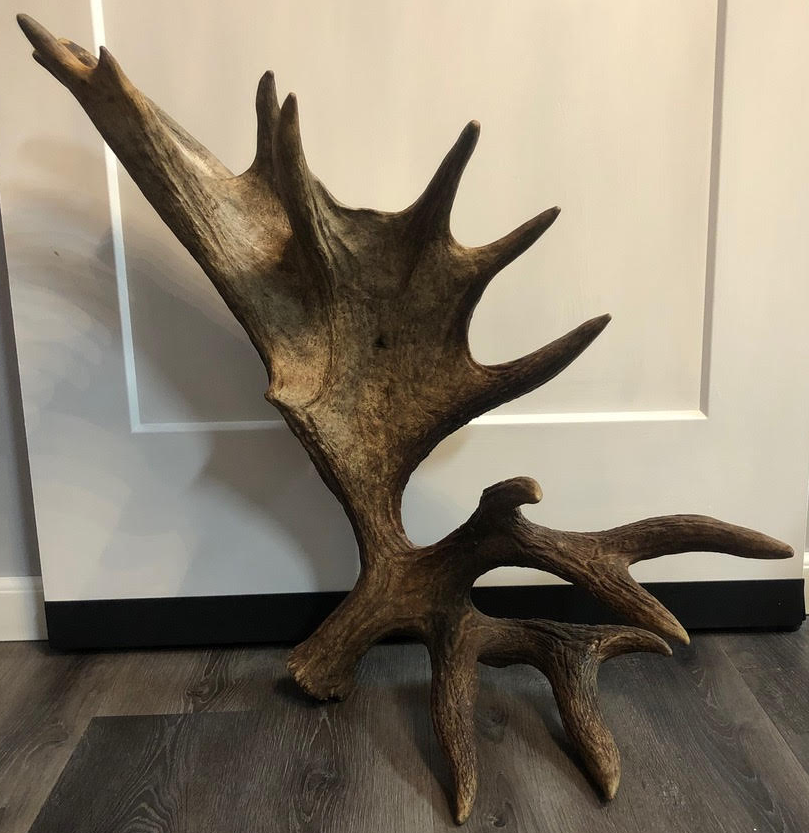