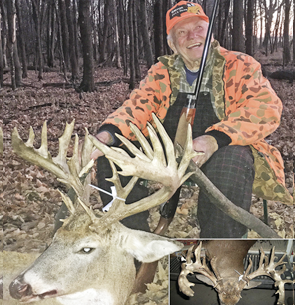 Monster buck likely among largest ever

That’s the day the 78-year-old killed a 36-point buck while hunt­ing near his home in Howard Lake. It weighed 216 pounds field-dressed. An unof­fi­cial score pegged the ani­mal in the 270s, though Wack­ler believes that’s high­er than it actu­al­ly is. He believes it will be in the 250s, which would place it among the biggest non­typ­i­cal bucks ever killed in the state.

“I’ve shot them up to about 190 pounds, but this is the first one I’ve got that was over 200 pounds, and it was by far the biggest rack,” he said. “The biggest I ever shot before was nine points.”

While Wack­ler has 80 acres of land near Cromwell in east-cen­tral Min­neso­ta, he’s been deer hunt­ing clos­er to home for the past cou­ple of seasons.

“My legs are get­ting so bad that it’s tough for me to get out into the woods,” he said.

So this year and last, he’s been hunt­ing on his daugh­ter and son-in-law’s farm, which is just more than a mile north of Howard Lake.

That Fri­day morn­ing, Wack­ler asked his son-in-law – Mike Young – if any of the corn near the woods had been har­vest­ed. Young said yes, so Wack­ler drove up to check it out. There was a clear­ing of about 60 feet between stand­ing corn and the woods, and “I thought it was a pret­ty good spot,” Wack­ler said. “It looked like it, anyway.”

He went home to take a nap and then returned about 2:30 p.m. He parked his truck in a low spot and walked about 100 yards.

About 3:40, Wack­ler changed posi­tions so he was fac­ing to the north.

“Then I sat back again and relaxed and watched the blue jays fly back and forth from the woods to the corn,” he said.

A lit­tle after 4, Wack­ler heard a com­mo­tion in the corn that “sound­ed like a freight train com­ing,” he said. The sound would start and stop.

“Then about the third or fourth time it stopped, I could see his head stick­ing out of the last row of corn,” he said. “I thought, oh my, that’s a big one.”

The deer was about 35 yards away.

“He stepped out and start­ed trot­ting across the open­ing,” Wack­ler said. “There was about 60 feet from the edge of the corn to the woods. When he got about halfway across there, I yelled at him – ‘Hey!’ – and he stopped and looked at me. That gave me the sec­ond or two I need­ed to put the sil­ver bead on his chest. I pulled the trig­ger and his tail went down and he took off.”

Sev­en or eight min­utes lat­er, Wack­ler made his way to the spot the deer had been. He saw blood on a corn stalk and blood on some of the brush lead­ing into the woods. Then he walked into the woods and saw the deer on the ground about 30 yards away.

Wack­ler poked the deer a cou­ple of times to ensure it was dead. His first thought when he saw the rack?

He sat down on a near­by log for five or six min­utes to regain his com­po­sure, and then walked up to the deer again and start­ed count­ing its points.

He said he wasn’t ner­vous when he was tak­ing the shot because he didn’t real­ize just how big the ani­mal was.

“I knew he had a big rack on him, but I just con­cen­trat­ed on the shot,” Wack­ler said. “I know if you con­cen­trate on the head, you’re going to miss them.”

Wack­ler, who said he was lucky to be “in the right spot at the right time,” plans to have the deer mounted.